I have been interested in design since the early 80’s when I was exposed to The Bauhaus School and many architect/designer/artists such as Le Corbusier, Eileen Grey, Breuer, Mies Van der Rohe, Oskar Schlemmer, Rietveld, Loos, Schindler, Neutra, Hoffman, Frank Lloyd Wright, Gaudi, Charles Rennie Macintosh, and Eames (just to name a few!). I was impressed with their buildings but also with the furniture and practical household items that they designed, and most importantly the theories and concepts they realized their ideas with, such as”less is more” and “form follows function.” 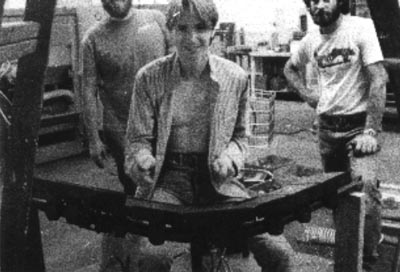 This inspired me to design and build my own electronic drum kit in 1983, for which I was awarded 3 patents. And ever since then I have been fooling around with developing products or concepts that I see a need for.

I first started stacking cymbals in 1978 with UK. Below is the 1st Zildjian china given to me when I got w/ Zappa in ’75 on top of the Zildjian ride I used on “Baby Snakes”. I used this stack with UK and Missing persons.

Then this “tree” type of arrangement became a key aspect of my playing style. Originally with a chinese bell on top, closed hi hat and stacked china over a ride, I now use a Factory Metal combo on top.

At that time I started using an all roto tom kit for which I developed a practical tom mounting system.

Then I developed one of the first overhead cymbal racks, and a spring mounted felt BD beater apparatus to strike a gong so you wouldn’t have to put down your stick to play it.

When I went back to playing all acoustic drums in 1985, I created the idea of playing roto tom castings as bells and as hi-hats – it was later marketed as “Spoxe.”

In ’76-’77 I asked a guy to build a practical double pedal for me out of my Camco strap pedals. He came up with the universal joint idea and took it to DW and after many further developments, the most popular double pedal in history was born! (I still have the prototype!)

In 1985 I began working with Don Lombardi of DW Drums to market my TBX electronic drum pad and we brought it out just as the bottom fell out of the electronic drum market. Only a few were sold and now they are collectors items!

Below are what I have left of it: the cymbal pad bar, some plates and pads from the lower section, a very early prototype of the pedal and some experimental materials w/ the dates they were put on (to see how long they would last!)

The above 2 examples were the actual working 3 zone pads from the kit.

In the early ’80s, I asked Don to make me a 3 point gong holder so I could play a gong as a ride cymbal.

Then in the later 80’s, I asked Don to rig up a double pedal that would allow me to play a bass drum out past my floor toms and the remote bass drum concept was born! Now we are using the same concept for remote hi hats as well.

Now I use the DW 9000 pedal but still w/ a Nylon strap. But I have them customize the cam adjustment to have a different shape and a longer throw to the extension adjustment underneath, so it more imitates the original cam shape and action.

Mid 80’s when I went back to acoustic drums, I started to use mini hats, as I had that sound mounted on the snare pad of the electronic kit.

Here are my closed mini hi-hats I use on either side of my snare today.

Now I am happily working with DW, Sabian, Attack, and Vic Firth who all market my latest products under the TB signature logo.

You can now buy my Signature series Drumheads and Sticks on this site.

With DW I have the TB Tonal Beater (light aluminum w/3 velcro-on striking surfaces, no longer available). I now use Puresound beaters & snares, w/ beaterDW /TB Sound Enhancers. (which fit on any beater).

The TB Sound Enhancers (tambourine jingles, shakers, finger cymbals, and more that attach to your BD beater to expand the orchestrational capabilities of your BD sound).

Shown below are some prototypes.

The TB Signature Piccolo Toms (2″x8″ single head drums) for melodic playing in groups or as a “Foot Tom” used w/pedal. Below are the 2 headed prototypes w/ offset mini lugs, and one of the earlier piccolo tom bank holder prototypes.

And a new TB Tune Secure device which prevents unwanted detuning, lug loosening, and back turning, but allows normal tuning and rapid head changing with a drill! This is probably the most important thing i have invented, as tuning to specific pitches and staying in tune are so critical to me! They are available in standard lug (24 thread per inch) sizes and fit most standard rims, but work best with DW True Pitch lugs (30 thread per inch). 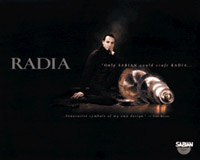 With Sabian, I have developed the TB Radia cymbal line designed to adhere to my melodic cymbal style of playing. TB Radia cymbals have a dark sound, more fundamental pitch, and a shorter duration in order to work in matched melodic sets of 4 to 8 cymbals. We have everything from splashes & crashes to chinas, bells,chimes, hi-hats, and gong.

A Radia ride cymbal (shown above) is coming soon!

With Attack-Universal Percussion I have the TB signature Mylar drumheads with a crimped on the steel rim. Clear, Coated, No Overtone BD, Black Thin-Skin BD Fronts, White Dot Snare & Medium Snare side, and many more are available. Full, rich,resonant, accurately tunable heads that won’t pull out at the rim & last longer than other similar weight mylar heads.

With Vic Firth I have the TB signature sticks “Phase 1&2” designed to enhance my finger bounce technique and pull more low end out of the toms by increasing the weight at the front of the stick. Phase 2 with a balanced, small, unobtrusive felt mallet at butt end for dual action rapid change between stick and mallet.

Shown below are several wacky prototypes that show the development from my Promark 777 oak model to the Vic Firth Phase 1.

Shown below are some fun things I keep lying around. These are the original bongos and cowbells I played on “The Black Page “! And my original Joe Pollard “SynDrums” from Baby Snakes.

A joke Thomas Nordegg ( Roadie for Zappa and Missing Persons) logo from the Zappa days on an anvil case from the mid 70’s.

A metal thing I made out of DW hi-hat parts which I use w/ a hard BD beater.